He Knows When You’re Lying 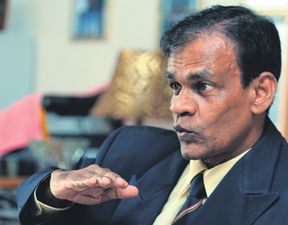 Jackson Yogarajah (pic) tilts his head, but doesn’t show surprise or any changes in his facial expression. He seemed distant, uninterested.

“I was lying to you,” this reporter repeats again.

“I know,” came the curt reply. The reporter had just spent some 10 minutes narrating a fictional story of how he had given the police a miss while he was abusing drugs some four years ago. Jackson, however, does not buy the story from the word go. “You were not expressive when you told me. You missed out details. If that’s the truth, you wouldn’t miss out on details.”
The 61-year-old Jackson lives in a small home-cum-office in Cheras, Kuala Lumpur and does something that very few people do in Malaysia — he’s a body language expert and trainer.
The Kuala Lipis-born Jackson probably is best-known as the author of 55 Reasons Why Sharifah Aini Wasn’t Lying, a 2005 book in which Jackson used 55 body language cues to explain why the veteran singer wasn’t lying when she said she was attacked by two thugs opposite TV3’s headquarters in October the previous year.
The police had failed to find corroborative evidence that Sharifah was attacked and she was accused of fabricating the incident.

“I had to come out and defend her, because I saw that she was not lying. Many people thought she paid me to come up with a book.
But I always tell people, all she gave me was a cup of tea when I visited her at her home,” Jackson told The Malay Mail.He had based his conclusion that she was not lying after watching several of her TV interviews in which she had spoken about the incident.
Months after the book was released, which sold more than 3,000 copies, Jackson received a call from the US, from researchers interested in his book. He sent his book, which was written by extensively quoting and referring to the works of eminent psychologist Paul Ekman, via mail to the US.
Three years later, a new TV series called Lie to Me is produced by 20th Century Fox, which tells the story of Dr Cal Lightman, a body language teacher and trainer (portrayed by Tim Roth).
Ekman was the consultant for the series which ran from 2009 to 2011.
“Many people told me that it might not be a coincidence that the series was conceived after my work was sent there,” Jackson said.
He currently conducts courses for salesmen, agencies, university professors, and even policemen.
“I consider training policemen to be the biggest highlight of my career. I trained Special Branch officers under their invitation so it was no mean feat. They recognise my work,” he said.
He started conducting such courses in 1996 but it took six years before he could do it full-time and embracing it as a profession publicly does have its ups and downs.
“When I tell people what I do, they assume that I am a mind reader. They get uncomfortable.
But people are like books. You don’t read a book you are not interested in. If you are interested, then you flip the pages and try to read,” he said.
“But there are benefits too. I was at an airline ticketing agency once and when I asked the agent if there are other places where I can get the tickets for a cheaper price, she said no, but I knew she was lying.

I looked into her eyes. I went to the next agency and got a cheaper ticket.”  ….Bernama
Posted by Jackson Yogarajah at 7:50 PM

1. To increase public awareness on the benefits of body language.
2. To enhance the use of body language to promote greater human understanding.
3.To promote knowledge on this field through research and education.
4. To provide support and association for all specialist and professionals in this field.